It’s summer of 2017 and the heat is really starting to add up. Water temperatures in the 90’s have helped build a lot of afternoon rain and thunderstorms in Key West this summer. We have had a couple of exciting rides home this summer, can’t say we really dodged lightning but we didn’t catch either. Thank Goodness. The warm water has put a lot of fishing deeper too where the Gulfstream water is cooler than the nearshore waters. The Dolphin fishing has been disappointing this summer and all good catches have been around debris that you found first. Fortunately the combination of slow Dolphin and hot Snapper fishing on the reef has kept a lot of fishermen nearshore, and when you do venture deep the competition is not so heavy. 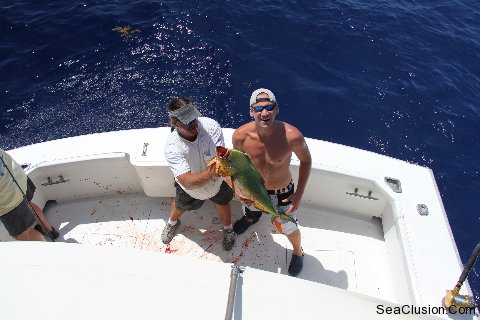 The Snapper fishing has been solid with really great catches of Yellowtail , Mangrove and Mutton Snapper all up and down the reef , get some chum ,some secret numbers and catch a bunch of nice fish. This pattern should remain for the rest of the Summer. Good snapper fishing on the reef , spotty Dolphin fishing on first found debris and a few Wahoo and Marlin to liven up the troll. Swordfishing at night has been productive around the full moons as the squid come to the surface at night. As bycatch of the Swordfish we have gotten big Blackfin Tuna at night while drifting for the Swords. Night fishing is not just for Swords , on the reef the Snapper bite is hot at night , and the temperature is much cooler.

Manage Cookie Consent
To provide the best experiences, we use technologies like cookies to store and/or access device information. Consenting to these technologies will allow us to process data such as browsing behavior or unique IDs on this site. Not consenting or withdrawing consent, may adversely affect certain features and functions.
Manage options Manage services Manage vendors Read more about these purposes
View preferences
{title} {title} {title}